Last Friday (Oct. 25), the Central Bank of Russia lowered its key rate by 50 basis points. The new key rate is 6.5 %. The CBR board noted that 12-month inflation has slowed faster than forecasted. The rate cut was fourth in this year. The board also pointed out that the key rate could be cut further at one of the upcoming meetings.

12-month inflation slowed in September to 4 %, and the CBR estimated that it has further decelerated in October. Underlying the slowing inflation are such factors as rather weak economy, ruble appreciation against the dollar (up about 9 % from the start of the year) and a good harvest. The CBR now expects 12-month inflation to slow to a range of 3.2−3.7 % (previously 4.0−4.5 %) at the end of the year, around 3.5−4.0 % at the end of 2020 (previously 4 %) and thereafter remain close to the CBR’s 4 % inflation target. 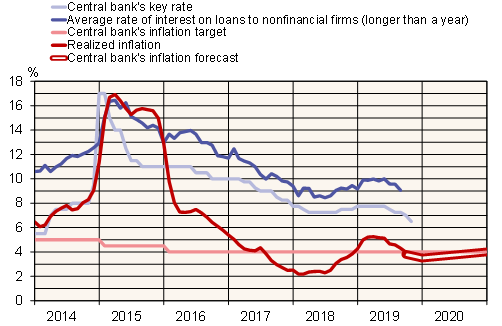