In response to the US announcement at the beginning of August of new tariff increases, the yuan’s exchange rate weakened to a rate of over 7 yuan to the dollar. At the end of August, the yuan weakened further with the US announcement of new tariff increases, even if they were not implemented after further talks. The yuan has since recovered somewhat. The US has kept its exchange rate concerns, however, at the top of the negotiating agenda in the current bilateral trade talks.

In recent months, central bank’s daily yuan-dollar fixing rate has typically been stronger than the market rate. On the markets, the onshore USD/CNY rate is allowed to diverge by up to 2 % from the daily fixing rate. The CNH rate in Hong Kong, which in theory floats freely without limits on its fluctuations, closely tracked the CNY rate throughout October. The rates sometimes diverged during August and September.

The yuan-dollar rate at end of October was 2 % weaker than at the start of the year (the euro rate was unchanged). 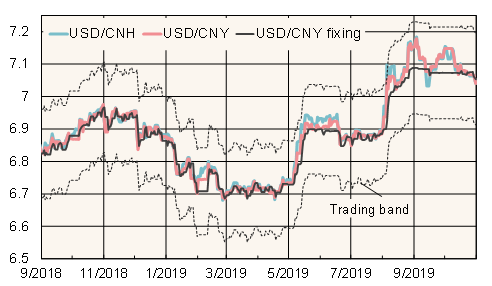