China’s current account showed a deficit in the first half of 2018, but finished the year with a surplus of 49 billion dollars. The 12-month current account surplus in the second quarter of this year rose to the equivalent 1.3 % of GDP, up from 0.4 % of GDP in 2Q18.

While detailed financial account information has yet to be released, the published data are already adequate to establish that the capital outflow from China has increased. Based on the released information, the net outflow of capital from China in the first six months of this year was about 100 billion dollars. In 1H18, the net capital inflow into China was about 80 billion dollars.

The sharp decline in China’s foreign currency reserves that began in the second half of 2014 came to a halt at the beginning of 2017. Since then, the amount of China’s total foreign reserves has remained relatively stable at about 3.2 trillion dollars. 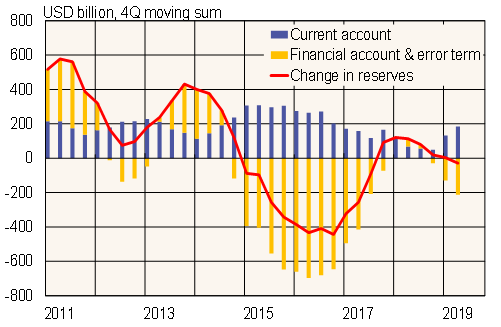