Total funding for the 13 national projects is scheduled to exceed 3 % of forecast GDP during 2019−2024. This includes the roughly 1 % of GDP ordered when the national projects were laid out in president Putin’s inauguration decree (ukaz) in May 2018.

The funding of national projects comes from different sources. The equivalent of about 2.5 % of GDP is planned to come out of the consolidated government budget (federal, regional and local budgets plus state social funds). The rest should be provided basically by the corporate sector. Budget funding represents about 7 % of estimated total government sector budget spending, of which five percentage points will come out of the federal budget. The Accounts Chamber notes that most measures under the national projects are such that they are already being implemented under other government programmes.

The federal budget funding allocated for national projects this year exceeds 4.5 % of total government sector budget spending or about 1.5 % of this year’s forecast GDP. About 96 % of the funding had already been given to the fund users by the end of June. Roughly a third of the money had been spent, but the situation varies considerably depending on the project. However, about 60 % of federal budget spending on the projects in January-June were transfers to regional budgets as well as the Pension Fund and Medical Insurance Fund.

Regional and local budget spending on project implementation has corresponded to about 60 % of realised project spending from the federal budget (includes transfers to regional budgets). Russia’s finance ministry has set a general guideline that a 95% federal to 5 % regional division to project financing should be followed. At the moment, regions have thus coughed up a considerably larger proportion of the project financing. Information on corporate financing for national projects is yet to be released. 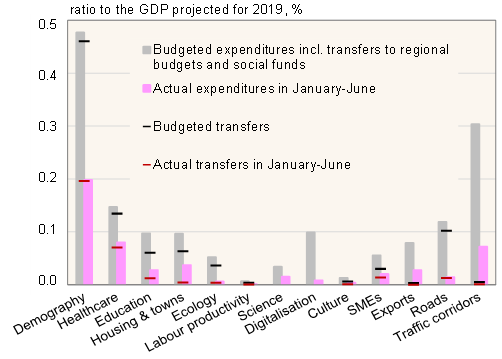