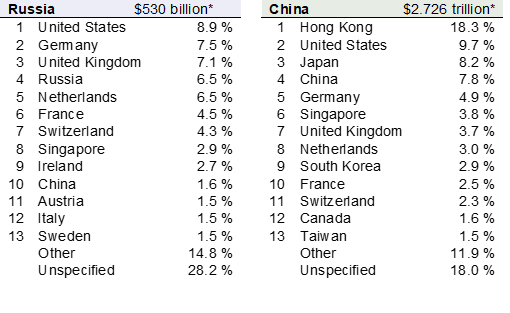 Sources: UNCTAD, CBR and PBoC.
*) Value of FDI stock based on the international investment position.

Traditional figures only report the immediate source of foreign direct investment and make no attempt to track down its ultimate source. This distorts the figures as it is common to move money via third countries to gain e.g. tax advantages or legal protections. Especially in the case of Russia and China, countries specialised in financial services figure prominently. For example, Cyprus accounts for over a quarter of foreign direct investment to Russia, while Hong Kong is the immediate source of over half of China’s FDI.

UNCTAD’s method chains the official statistics on immediate investors in order to trace ultimate investors. While this removes the disproportionate representation of financial hubs, it does not precisely identify the ultimate source of investment. UNCTAD itself emphasises the experimental nature of their efforts aimed at filling in deficient data with simplifying probabilistic assumptions. The model’s basic assumption is that ownership chains do not have any bias back towards their origins. In fact, investors often recycle investment via a financial hub back into their own country or a neighbouring country. As a result, the model may overestimate direct investment in Russia and China by foreigners and underestimate Russian and Chinese investment via financial hubs back to the home country.