While official figures show that the structure of Chinese GDP has hardly budged in recent years towards a more consumption-driven economy (BOFIT Weekly 23/2019), the structural evolution of China’s labour market, which consists of nearly 780 million people, shows a strong shift to the service sector.

China National Bureau of Statistics reports that the service sector had nearly 360 million workers in 2018, with the number of employees rising by over 10 million from 2017. The service sector has emerged this decade as the largest employer in the Chinese economy. Last year, 46 % of all workers were employed in service jobs.

The number of workers in primary production (mainly agriculture), has dropped precipitously since the turn of the millennium. China’s accession to the WTO in 2001 strengthened its course to become the global hub of manufacturing and assembly, which in turn caused a massive influx of workers from the countryside to cities. Some 366 million people worked in the primary production sector in 2002, but that number declined to just 203 million by 2018. During the same period, the share of workers employed in primary production fell from 50 % to 26 %.

Number of workers by sector (in millions) 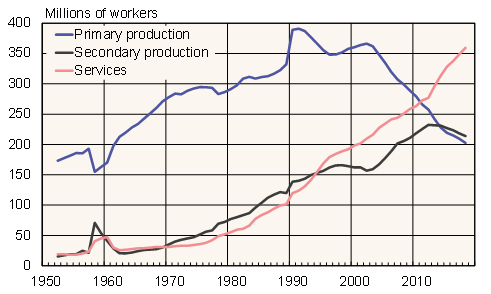