At the end of May, National Bureau of Statistics published the demand structure of GDP for 2018. China’s evolution towards a consumption-driven economy seems to be making slow, if any, progress. Fixed investment, which corresponded to an astronomical 43 % of GDP last year, grew slightly. Both private consumption (39 % of GDP) and public consumption (15 %) also increased their shares of GDP slightly. The GDP share of net exports of goods and services fell below 1 %.

The size of an economy is usually measured roughly speaking either by figuring out the amount of goods and services produced (supply measure) or determining the amount of goods and services used (demand measure). China has traditionally measured the supply, while Western economies typically primarily measure the demand. Notably, the two measures of Chinese nominal GDP have begun to diverge in recent years. China’s supply-measure GDP for 2018 is 1.6 trillion yuan (nearly 2 %) larger than the demand measure, even if in principle they should be equal. 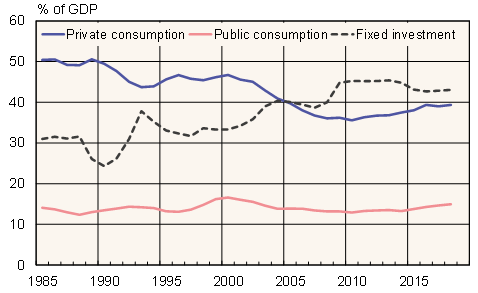