On June 14, the Central Bank of Russia, as markets anticipated, lowered the key rate by 25 basis points. The key rate is now 7.5 %. The CBR said their decision reflected slowing annual inflation and tepid economic growth in the first half of the year.

Annual inflation peaked in March at a rate of 5.3 %, and annual consumer price growth reached an estimated 5 % at the beginning of June. Ruble appreciation (up 8 % against the dollar since the start of the year) and slowing growth in retail sales contributed to slowing inflation. The CBR also noted that the pass-through of the VAT hike at the start of the year has been transferred to consumer prices. The central bank now forecasts 12-month inflation slowing further to a range of 4.2–4.7 % (reduced from the earlier forecast of 4.7–5.2 %) at the end of 2019. In 2020 and 2021, annual inflation is expected to remain close to 4 %.

The weaker-than-expected economic data early in the year (BOFIT Weekly 21/2019) also have caused the CBR to slightly cut its GDP growth forecast for this year. The updated forecast reduces the growth outlook from a range of 1.2–1.7 % to 1–1.5 %. Government investment projects, however, might return growth to a level of 2–3 % in 2021. The CBR did not rule out the possibility of a further rate cut at one of the upcoming board of directors’ meetings. 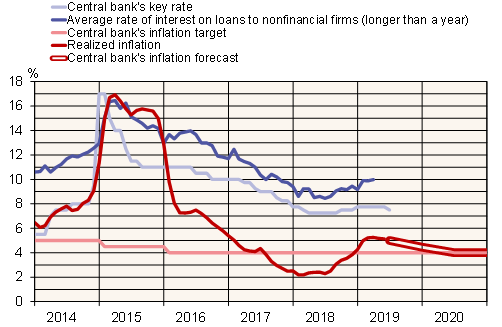