In dollar terms, the value of Chinese goods exports in May was up 1 % y-o-y. However, the value of imports was down by nearly 9 % y-o-y. For the January-May period, the level of exports remained roughly unchanged from the first five months of 2018, while imports contracted by nearly 4 %. China’s goods trade surplus in the period hit 130 billion dollars, up from 94 billion dollars a year earlier.

With China’s other major export markets showing declines or weakness in recent months, export growth is currently driven by gains in EU markets (up 6 % y-o-y). Exports to the US continued a string of down months, falling by 4 % y-o-y in May.

The complexity of the situation can be seen in the fact that exports and imports tied to international production chains have performed worse than the rest of China’s foreign trade. 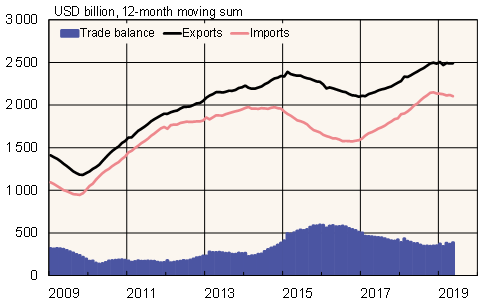