The revival of investor interest in emerging markets has been apparent in Russia’s financial markets. Share prices this year have also been buoyed by rising global oil prices and expectations of juicy dividends from Russia’s biggest corporations. The Moscow Stock Exchange’s RTSI index is up about 15 % from the start of this year, and now matches levels reached in early 2018. The improved market conditions have raised interest in ruble-denominated corporate debt securities and government treasuries.

During the first five months of the year, the finance ministry issued government bonds worth roughly 1.3 trillion rubles (18 billion euros), an amount greater than all issues in 2018. A monthly record of 404 billion rubles (5.6 billion euros) in new debt was sold in April. Government treasury issues remained brisk in May with the sale of 376 billion rubles in new issues. While the Russian government has no big need to issue debt, the current favourable market conditions have motivated the government to move up scheduled debt issues. The Central Bank of Russia reports that foreign investors purchased 45 % of treasury issues in April. Foreign investors currently hold about 27 % of all government ruble-denominated debt securities. Although the share has increased sharply in recent months, it is still smaller than in early 2018. Increased demand has reduced yields and the yield on e.g. the 10-year OFZ treasury bill is now below 7.9 %. The CBR’s key rate is currently 7.75 %. 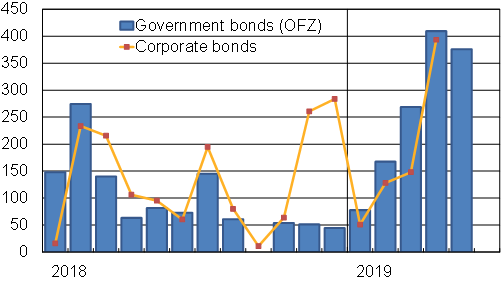