While the PBoC has lowered reserve requirements for banks this year, the net effect of its applications of various monetary instruments has been to reduce net liquidity in the system. In China, a broad range of policy instruments is used to adjust the monetary policy, so the overall monetary stance has to be evaluated as the combined effect of all tools.

Reserve requirement ratios (RRRs) were lowered twice in January, which was estimated to add about 1.5 trillion yuan in liquidity to the system. In May, the central bank announced a targeted RRR cut affect about 1,000 rural banks (implemented in three phases between May 15 and July 15.), which is expected to increase the liquidity by CNY 280 billion.

The net impact of open market operations (OMOs) this year (as of May 28) has been to reduce liquidity by about CNY 610 billion. The PBoC has granted commercial banks CNY 400 billion in medium-term lending facility (MLF) funding this year, considerably less than maturing MLF debt (CNY 1.73 trillion).

Since the beginning of the year, the central bank has used its new targeted medium-term lending facility (TMLF) to provide banks funding at slightly lower rates for small business lending. At total of CNY 520 billion in TMLF credit was issued in the first four months of this year.

The overall impact on liquidity in January-May from the monetary policy measures has been fairly modest (estimated at about CNY 200 billion or USD 30 billion). In the same period last year, increase was clearly higher (estimated at CNY 1.6 trillion or USD 240 billion). The figures do not include pledged supplementary lending (PSL) provided to three policy banks.

The PBoC has kept interest rates unchanged this year. For example, the rate on the one-year MLF credit is 3.3 % (TMLF credit at 3.15 %) and the rate on the 7-day reverse repo used in open market operations is 2.55 %. Other central bank rates have also remained unchanged. This week, PBoC governor Yi Gang said that the central bank could finally waive the announcement of loan reference rates. Restrictions on interest rate pricing of commercial banks were lifted, at least nominally, already in 2015.

The decrease in central bank funding may reflect lower financing demand from commercial banks. A cautious monetary stance that resists easing might also reflect increased devaluation pressure on the yuan due to the intensified trade war. 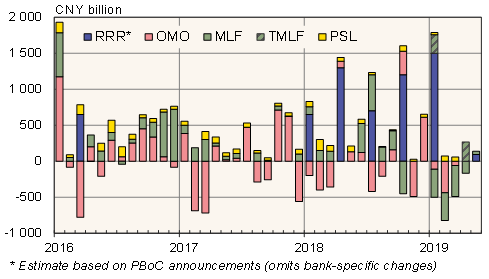