Flows of foreign direct investment, especially inbound FDI flows to Russia, have continued to decrease in recent years. The role of EU countries other than Cyprus as immediate sources or recipients of the FDI increased. The shares of large EU economies, however, are relatively small.

When considering the ultimate source or recipient countries of FDI flows in Russia’s case (no published overall data), it is important to remember that Russian investors move large amounts to countries that provide favourable treatment and then repatriate the money to Russia as direct investment. The FDI inflows to Russia from foreign firms also often move indirectly via third countries.

As regards the pattern of recent years for EU countries other than Cyprus, most FDI inflows to Russia came from the UK and Luxemburg, while outbound FDI from Russia went especially to Austria and also the UK. Russians have pulled out significant amounts of their FDI from the Netherlands. The FDI flow from Russia to Cyprus remains substantial. Cyprus is still overwhelmingly the largest FDI recipient from Russia. In turn, FDI made earlier from Cyprus to Russia have been wound down (negative flows) in recent years.

Somewhat reminiscent of Cyprus, several other small island states have received considerable amounts of Russian FDI. While FDI flows between them and Russia overall have declined clearly in recent years, the roles of certain island havens such as the Bahamas, Jersey, British Virgin Islands and Bermuda continue to create a notable share of business. The popularity of Gibraltar, as well as Saint Kitts and Nevis islands, was short-lived in the early years of this decade.

The role of other countries as immediate FDI sources or recipients has remained more stable. The top of these countries for Russia are Singapore and Switzerland. The shares of e.g. the US, Japan and China remain much smaller. 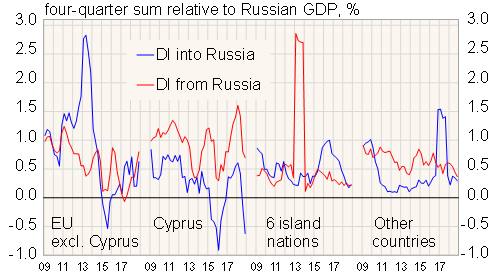