The Central Bank of Russia reports that Russians last year spent 34 billion dollars on travel services abroad, a 9 % increase from 2017.

Turkey, Germany, Spain, Thailand and Italy topped the list of countries in Russian travel spending. Russian tourism abroad is highly dependent on the purchasing power of income earned in Russia. In 2014–2016, the ruble’s external value declined along with the collapse in oil prices, but since then it has remained rather stable. As nominal wages have grown, Russian wage-earners have seen a slight improvement in their foreign purchasing power. 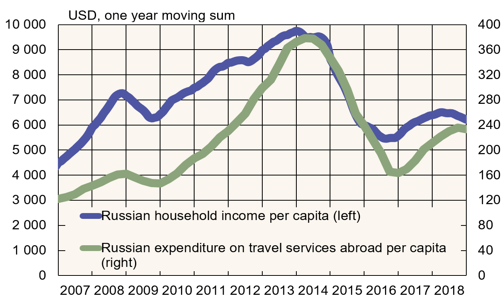