Since the deep slump in 2015, retail sales have recovered to their previous level in only a few of Russia’s more than 80 administrative regions. The Moscow region led the rise, due in part to shifts where retail trade has been moving to the region from the City of Moscow. The Moscow region continues to account for an increasing share of national retail sales, which, together with the City, was nearly 23 % of the country’s retail sales in 2018. Retail sales in the City of St. Petersburg and the Leningrad region have recovered to 2014 levels. In five federal districts, however, retail sales last year were still at levels 10−15 % below those of 2014.

Real change in manufacturing, investments and retail sales in 4 federal districts and the 2 largest urban centres, 2015−2018 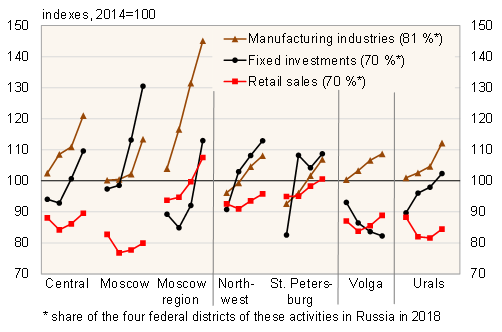