China’s Ministry of Commerce reports that foreign direct investment outflows from China amounted to 130 billion dollars last year, a decline of 18 % from 2017. Outward FDI was slightly less than inward FDI to China, which was valued at 138 billion dollars. 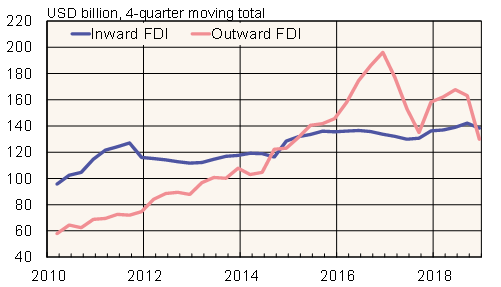 A recent report from MERICS and the Rhodium Group finds that the flow of Chinese FDI to EU countries last year fell to just 17 billion euros, a 40 % drop from 2017 and the lowest level of FDI since 2014. The UK, Germany and France together accounted for nearly half of Chinese FDI to EU countries, down from more than 70 % in 2017. Investment in Sweden, however, soared after Volvo-owner Geely pumped in 3 billion euros in new capital. As recently as the start of this decade, Chinese state-owned enterprises accounted for 80–90 % of Chinese FDI to the EU. The Rhodium Group estimates that the share was just over 40 % last year.

FDI outflows from China have fallen since 2017 after China implemented tighter guidance on investment abroad and narrower access of Chinese firms to financing. A number of firms struggling with debt last year were forced to sell a part of their foreign assets. MERICS/Rhodium Group estimate that Chinese firms divested at least a total of 4 billion euros in EU assets last year.