While Rosstat’s 2.3 % initial estimate for Russian 2018 GDP growth clearly exceeded expectations, our latest BOFIT Forecast for Russia 2019–2021 sees growth slowing this year. Lower growth in public sector wages and a modest pick-up in inflation bode lower real wage growth. Growth in private consumption will be curtailed by a two-percentage-point increase in value-added taxes at the start of the year. Growth in household borrowing, a bulwark of private consumption over the past two years, should remain high, even if higher on-year growth is unlikely.

If oil prices remain at current levels, the public-sector budget should remain in surplus. The rise in budget revenues will slow and the government’s fiscal rule should limit growth in public consumption. Private consumption in Russia corresponds to roughly half of GDP, while public consumption accounts for just under 20 %.

Numerous investment programmes associated with the state-lead national projects are set to get underway in 2020 and 2021. The project spending should slightly boost economic growth, especially in 2020. In contrast, there are no signs of a broad-based recovery in private investment. The government hopes to attract investment through such measures as subsidising domestic production, increasing domestic-content requirements and guiding large firms to participate in the financing of national projects. The business environment remains burdened by uncertainty and structural problems with the economy. The pick-up in investment growth is likely to be temporary and the economy’s investment rate should remain at just over 20 % of GDP.

Substantially higher growth in export volumes relative to import volumes supported economic growth last year. During the forecast period, this gap between export and import growth will narrow. Growth in the state’s overall presence in the economy and lack of market reforms depress the growth outlook in the years ahead. 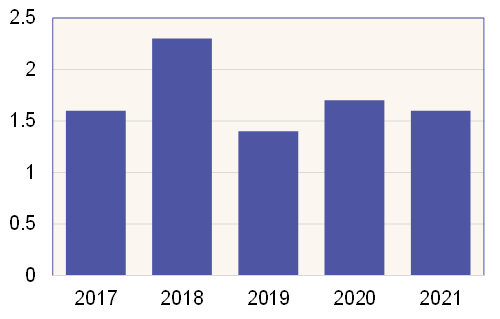