China customs reports that the country’s foreign trade continued to grow briskly in October, with the value of goods exports climbing by 16 % y-o-y and goods imports by 21 %. Both growth rates are at roughly the same levels as in previous months. Roughly half of the growth in value of imports and exports reflects price changes, while the other half reflects increased volumes.

Measured in terms of volume, China imported 8 % more crude oil, 11 % more coal, 7 % more pulp and 17 % more copper in the first ten months of this year than in the same period in 2017. While the volume of iron ore held steady, steel output continued to rise despite a campaign to reduce overcapacity in the industry.

Unlike many other indicators, the relatively stable growth in commodity imports does not suggest weakening economic conditions. This view is possibly distorted by the fact that China does not report its commodity inventories. Moreover, reduced imports of recycled metals due to restriction on such imports have had to be substituted with other imports. 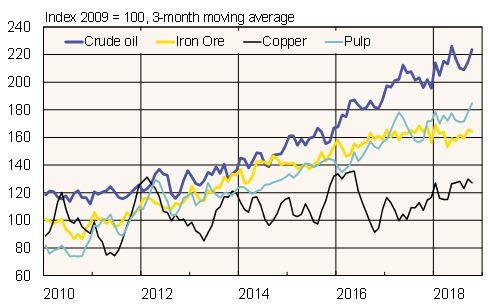