According to the budget rule, a share of oil tax revenue will be transferred to the fund if the price of oil stays above 40 dollars a barrel. As this is the case, it is expected that the fund will be soon refilled on top of the funds already accumulated by October 31. The first addition to the fund this year was made in June. Nearly 15 billion dollars were added then.

The Fund currently corresponds to 5.1 % of GDP. Under the finance ministry’s current plans, the Fund will increase in size over the coming years. In 2021, its size would reach 216 billion dollars, or 12 % of GDP. Russia’s reserve funds last reached such magnitude in 2009. The government wants to use a part of the increase in tax revenues brought about by higher oil prices to build up Russia’s financial buffers. 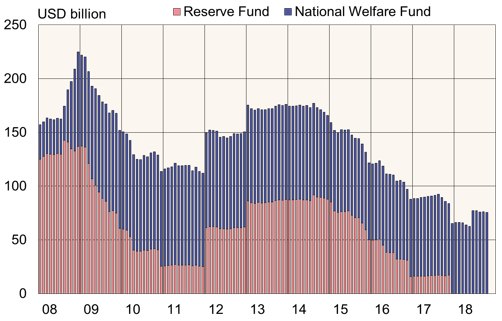