Preliminary figures show Russian GDP grew by 1.3 % y‑o‑y in the third quarter, down from 1.9 % in the second quarter. It seems likely, however, that seasonally-adjusted GDP was unchanged from the second quarter. In the first nine months of this year, GDP growth has averaged 1.5 % y‑o‑y.

Production figures for October indicate a re-acceleration of Russian economic growth. The change in industrial output was 3.7 % y-o-y, driven largely by strong on-year growth in extractive industries (7.4 %). The sharp rise in oil prices in early autumn caused some oil-producing countries, including Russia, to boost production which is already reflected in monthly production figures. If the recent slide in oil prices leads to new agreements on production cuts, production of Russia’s extractive industries could begin to contract.

The main demand-side indicators were more modest than those on the supply side. The volume of retail sales, which increased by just 1.9 % in October, continued a slowing trend. Wage growth and growth in bank credit granted to households also slowed. 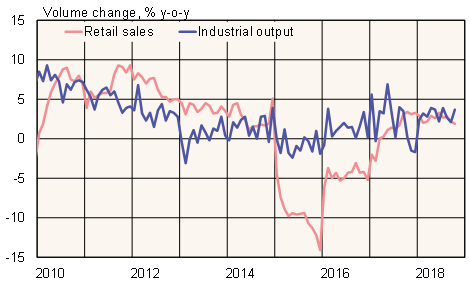