For large banks, the RRR falls to 14.5 % of deposits. The RRR level varies depending on each bank’s risk exposure and loan portfolio. Some 450 billion yuan of the freed-up reserves will be available to pay off maturing PBoC medium-term lending facility (MLF) credits. The lowering of the RRR will have a liquidity effect of 750 billion yuan (110 billion dollars).

As before, the PBoC stressed that the RRR cut does not imply a change in its monetary stance. The PBoC must be cautious in its messaging as the monetary easing could be seen as conceding economic weakness and puts depreciation pressure on the yuan. This week, the yuan weakened further against the dollar. Interest rates on domestic money markets declined slightly.

Interest rates in Hong Kong’s offshore-yuan (CNH) market rose this week, making it more expensive to speculate on yuan depreciation. The PBoC last month signed an agreement with the Hong Kong Monetary Authority, whereby the PBoC will be allowed to issue its own bonds on the Hong Kong market to influence yuan liquidity. Chinese commercial banks will also assist as needed in steering offshore yuan liquidity. 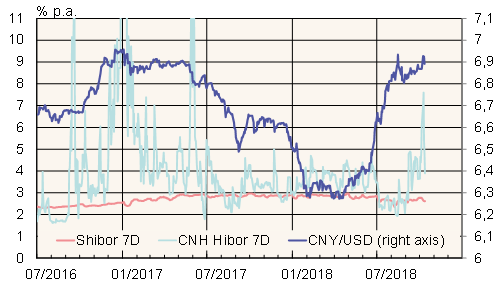