The IMF's 2018 Article IV Consultation praises China for its recent reform progress. It especially welcomes the actions taken tackling vulnerabilities facing the financial system as well as the risks to stability posed by China's large shadow banking sector and its links to the formal banking sector. While credit growth has slowed, it is still high, so the IMF repeated its earlier warnings on the dangers of excessive indebtedness. While reining in credit growth inevitably restrains economic growth over the short run, it lays the foundations for sustainable long-term growth.

Now that China has 40 years of reform under its belt, the IMF encouraged its leaders to continue the shift in monetary policy away from money supply instruments to interest-rate based guidance. Measures should be actively developed to help the yuan achieve a free-floating exchange rate regime. The IMF team expressed hope that China would hold to its commitment to opening up its economy and allowing markets to play an increasing role. While there has been some incremental progress in removing barriers to foreign trade and investment, China is still far more closed to foreign direct investment and services trade than typical emerging economies. Despite restrictions imposed in branches suffering from overcapacity, the IMF said the sustainable answer is to let unprofitable "zombie" businesses fail. It also said the government has generally dragged its feet in reforms of state-owned enterprises.

Due to tightened financial market regulation and abatement of foreign demand, the IMF estimates that growth of Chinese GDP will slow slightly to 6.6 % this year and to 5.5 % by 2023. Although the impact of import duties currently imposed on China by the US will have little impact on economic growth, the IMF believes that embracing protectionist policies may represent one of the biggest challenges to growth. The IMF wants China to soothe its strained trade relations through negotiated settlement that emphasise free trade and support international and regional cooperation. 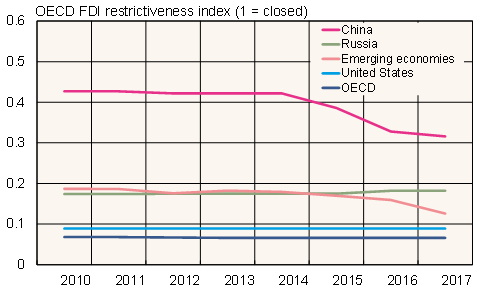