Bank lending overall saw a slow recovery in the first half of the year. CBR figures show Russia's credit stock was up 3.4 % y-o-y at the end of June. Corporate lending grew slowly, with the stock of corporate loans rising by just 1.9 % in January-June (accounting for exchange rate changes). Initial figures show high lending growth in the construction sector, which could foreshadow a recovery in construction activity. In contrast, lending to manufacturers rose by just 1 % in the first five months of the year.

Banking sector earnings overall in the first half of 2018 amounted to 634 billion rubles (8.7 billion euros), a slight drop from 1H17. In particular, profitability was dragged down by losses of banks undergoing the central bank's restructuring programmes. 145 banks declared losses in the first half of this year.

Under new regulations that entered into force at the start of the year, small banks may apply for a "basic" licence rather than the usual general banking licence. The basic licence permits limited banking activity and is only subject to limited supervision requirements. The basic licence has generated little enthusiasm so far. In the first half of this year, only six banks were granted basic licences.

The decline in the number of banks has continued, albeit at a slower pace than in previous years. In the first six months of 2018, the central bank cancelled the licences of 31 banks for regulatory violations. Another six banks merged with other banks. Most banks that lost their licences are small, controlling only a tiny fraction of the market. Russia's 50 largest banks account for about 90 % of total banking sector assets. At the end of June, 524 credit institutions operated in Russia, down from 589 a year earlier. 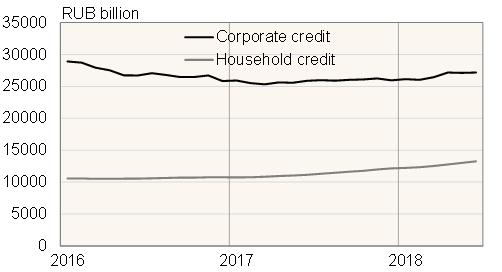