The second-quarter rise in federal budget revenues was so substantial that first-half revenues were up by over 20 % y-o-y. Most of the revenue boost came from oil & gas tax revenues, which increased by more than 35 %. Oil & gas revenues of the past 12 months were equivalent to over 7 % of GDP, which is the highest level of these revenues since autumn 2015. Other budget revenues continued to rise well, driven almost entirely by increased value-added tax revenues.

While federal budget spending climbed sharply in the second quarter of this year, it was only up 3 % y-o-y for the entire first half. Defence spending increased by 10 % and spending on domestic security, order and law enforcement by over 6 %. Other spending grew by less than 1 %. The federal budget deficit has shrunk considerably as a result of surging revenues. The federal deficit during the past 12 months was less than 0.1 % of GDP. 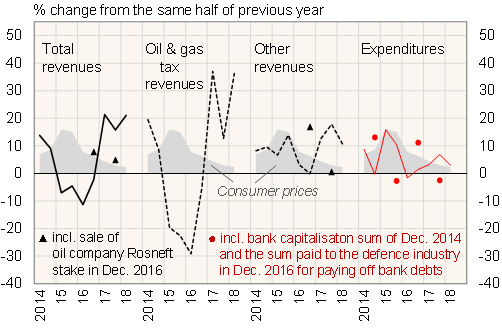