The European Commission's Annual Report on Trade and Investment Barriers notes that the wave of protectionism that began after the global financial crisis still continued last year. At the end of 2017, the European Commission said it was aware of 396 barriers created through trade and investment policy that were substantially harmful to European firms. While the EU managed to eliminate 45 obstacles, the number of barriers in force rose by a couple dozen from 2016.

Russia and China top the list of countries setting up the most barriers to trade and investment. China reportedly last year erected the highest number of new barriers (10) to European firms doing business in the country, while Russia came second adding six new barriers. The EU subsequently managed to get China to drop seven of its barriers, but only managed to get Russia to cancel one.

Last year European firms were most concerned about China's enactment and implementation of a cybersecurity law that entered in to force in summer and threaten the ability of firms to operate in China. In Russia, new regulations of state enterprise procurements that overwhelming favour domestic firms were seen the most disconcerting making it harder to do business there. European car manufacturers report unfair treatment in both countries.

Number of trade and investment barriers imposed on EU firms 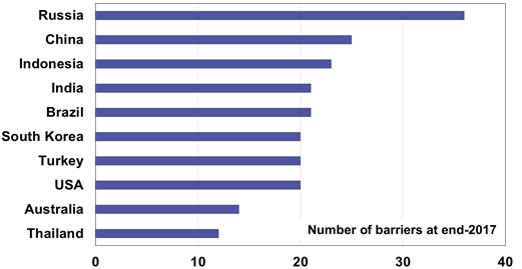