In its presentation of the first draft of the three-year budget framework, the finance ministry raised its revenue estimate for 2019 and 2020 by about 4 trillion rubles ($63 billion or 3–4 % of GDP) above those defined under the current budget law. The massive revenue increase largely reflects a higher oil price assumption leading to higher budget revenues from taxes on oil & gas earnings. Under the new framework, the average price of Urals-grade crude oil during 2019–2021 is assumed to be about $60 a barrel. The current budget law assumes a price around $40. Another large source of additional revenues is the proposed hike in the value-added tax that is currently in the duma. It is estimated to raise annual budget revenues by 600-700 billion rubles.

The new three-year framework calls for increased spending of about 10 % in 2019–2020 compared to the current budget law. Most of the additional spending, about 1.2 trillion rubles ($19 billion) in 2019 and 2020, will be directed at financing president Putin's latest May Decree (details of how the money will be spent have yet to be released). The finance ministry has also proposed establishing a Development Fund within the federal budget to finance large infrastructure projects. The value of the Development Fund would amount to 3.5 trillion rubles during 2019–24 and would be financed mainly by government borrowing.

Higher revenues in the new framework will also raise public finances on surplus contrary to earlier expectations. Next year's budget surplus is estimated at nearly 2 % of GDP. The federal budget structural deficit calculated according to the oil price defined in the budget rule ($42–43 a barrel) would, however, remain at around 0.5 % of GDP in coming years, even if the budget rule states it should be at least in balance. The discussion on the new framework continues in the Duma. 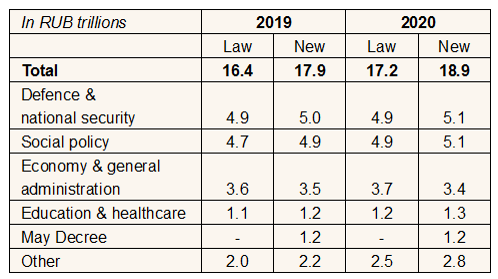