June economic growth was mostly driven by private consumption. After perking up in the spring months, the trend in investment-driven branches weakened. Despite mixed performances, the Russian economy generally appears to be on a modest growth track in line with earlier expectations.

On-year growth in industrial output slowed in June to around 2 %. On-month seasonally adjusted industrial output volume even contracted a bit last month. Most of the slowing came from lower manufacturing growth. The extractive sector saw gains on increased oil & gas production. The spring growth spurt in construction activity ended in June with construction down over 1 % from a year earlier.

In their latest estimates, the Central Bank of Russia and economy ministry find that Russian GDP growth accelerated from 1.3 % p.a. in the 1Q18 to close to 2 % in the 2Q18.

Trends in core sectors of the Russian economy 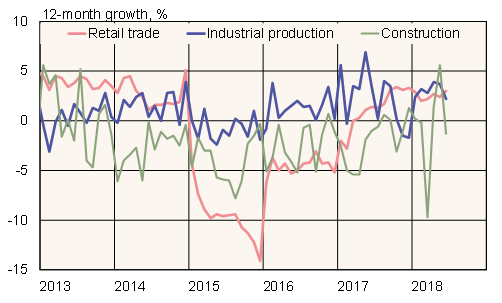