Russia's finance ministry reports that government defence spending fell by 25 % in nominal ruble terms last year. The defence spending assessment of the Stockholm International Peace Research Institute (SIPRI) and calculations in the Gaidar Institute for Economic Policy (IEP) both suggest that Russian defence spending declined slightly less. The discrepancy reflects the fact that SIPRI and IEP figures include military spending outside the defence expenditure budget category, especially social security, homeland security and spending on the economy. Defence spending contained in these expenditure categories grew rather briskly last year, increasing their share in the accounting for total military spending. The share was 26 % in SIPRI figures and 33 % in data counted by IEP.

The three sources mentioned all note the defence spending-to-GDP ratio in 2017 was similar to 2014 when spending had already surged. The finance ministry puts the ratio at slightly over 3 %, SIPRI 4.3 % and IEP 4.6 %. 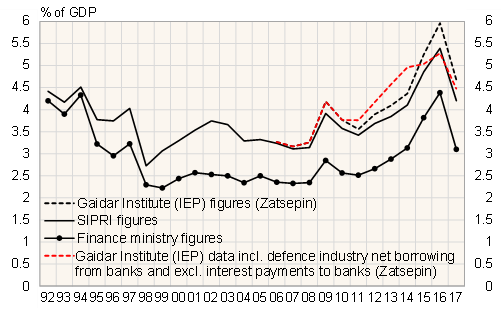