Tourism rebounded last year in response to the mild economic recovery and ruble appreciation. Russians made 40 million journeys abroad and spent $31 billion on tourism, an increase of nearly 30 % y-o-y. The most popular tourist destination for Russians last year was Turkey, increasing nearly six-fold as Russia lifted its travel restrictions. Other popular destinations included neighbouring countries like Finland, Kazakhstan and China. Tourism is expected to grow briskly also this year.

A UN report finds that the total Russian tourism spending abroad was the eighth-largest in the world last year. The report also found that Chinese tourism spending abroad, by a large margin, was the biggest in the world. The Chinese last year made 143 million trips abroad (including Hong Kong) and spent nearly $260 billion. Relative to population, nearly one in three Russians travelled abroad last year, while one in ten Chinese travelled abroad.

Tourism from abroad to Russia has developed more weakly. In 2017, about 24 million foreign tourists visited Russia, a decrease of about 1 % from 2016. Russia's foreign tourism earnings were about $9 billion. The majority of foreign tourists came from CIS countries. Non-CIS visitors were most often from China or Finland. Tourism this year is expected to rise with the FIFA World Cup Soccer championships. 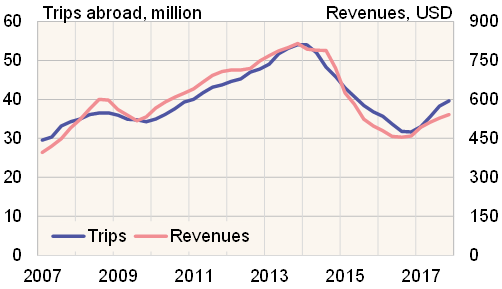