As of end-March, the People's Bank of China's broad measure of credit (total social financing or TSF), which includes corporate and household borrowing, stood at 179.9 trillion yuan, or 213 % of GDP. While acceleration in nominal GDP growth caused the TSF-based debt-to-GDP ratio to fall slightly in the final three quarters of 2017, China's debt-to-GDP ratio began to head back up in the first quarter of this year.

Rapid growth in bank lending continued with the total stock of bank lending rising to a record high of nearly 150 % of GDP. The stock of bank loans granted to households in March was up 23 % y-o-y, while the total stock of yuan-denominated loans rose by 13 %. 26 % of yuan loans went to households. The stock of trust loans continued to swell (up 23 % y-o-y), while the stock of entrusted loans, another major product of the shadow banking sector, fell year-on-year for the first time ever. Regulation of entrusted loans was increased significantly this year. 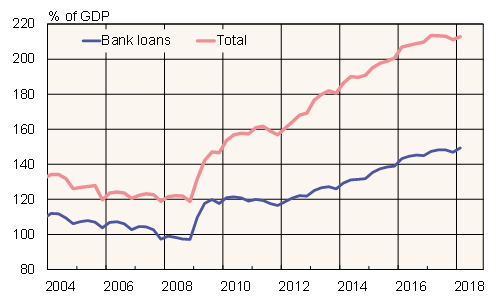