Real estate portal operator SouFun reports the deceleration in the average rise in housing prices continued in the first quarter of this year. Chinese housing prices in March 2017 averaged a rise of 17 % y-o-y in SouFun's survey of 99 cities. Housing prices this March were up just over 6 % y-o-y. Price growth in large cities has been considerably lower than the national average. SouFun reports that the average price of new apartments in March in its surveyed cities was 14,100 yuan (€1,800) per square metre of liveable floorspace. For example in Shanghai, apartments were going for 47,000 yuan (€6,100) per square metre.

Despite the moderation in price growth, rising indebtedness, overbuilding and receding affordability relative to income levels cause concern. Part of the overheating of China's housing markets also reflects efforts by local governments to raise money through the sale of land use rights. Purchasing an apartment in China on average now consumes nearly 30 years of household income. Apartment affordability is even worse in big cities.

Officials hope the long-planned property tax based on appraised value will make it easier for local government budgeting, reduce speculation in housing markets and increase the popularity of renting apartments. At the National People's Congress last month, Premier Li Keqiang announced that the government will steadily push forward legislation on property tax, but no specific timetable on its roll-out was mentioned. 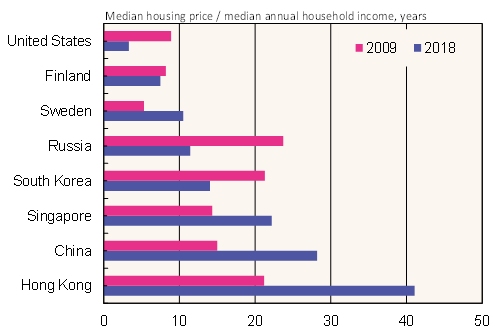