Private consumption began to recover last year, increasing in real terms by about 3.5 % y-o-y after declining by a total of 12 % over the previous two years. Household consumption last year was slightly lower than in 2012, but still up around 25 % from a decade ago.

All the main categories of household consumption have started to revive. The strongest recovery last year occurred in spending of Russian travellers abroad on goods and services. On the other hand, consumption in all core categories last year was still far below the pre-recession peaks of several years back. Imports of consumer goods last year were still even below the 2008 level.

Domestic online sales and imports of goods ordered from foreign online sellers are still significantly smaller categories at present. After contracting during the recession two years ago, online sales have recovered. Over several years, there has been strong growth in online purchases especially from foreign sellers. 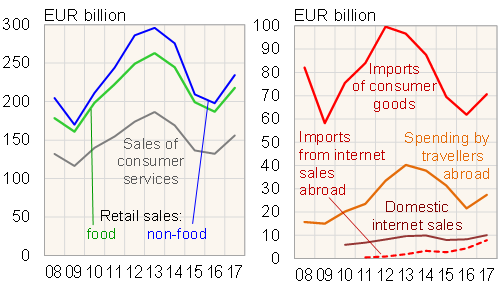