The latest annual report from the World Intellectual Property Organization (WIPO) notes that globally 243,500 patent applications under the Patent Cooperation Treaty (PCT) were filed in 2017, an increase of 4.5 % over 2016. Patent applications in China have risen at a rate of over 10 % a year since 2003. China last year overtook Japan as the world's second-most active patent-seeking country.

In 2017, the five biggest countries in international patents were the United States, China, Japan, Germany and South Korea. India ranked 16th with 1,603 patent applications, just ahead of Finland with 1,595 applications. The number of patent applications from Russia (ranked 23rd) increased by nearly 23 % to 1,097.

Chinese telecom giants Huawei and ZTE are the world's biggest patent seekers, accounting for 3 % of all PCT patent filings last year. The top ten patent-seeking companies include seven from Asia, two from the US and one from Sweden. The biggest group of PCT filings in China and South Korea related to digital data transfer, while they tended to focus on electrical machinery in Japan, computer technology in the US and transport technology in Germany. 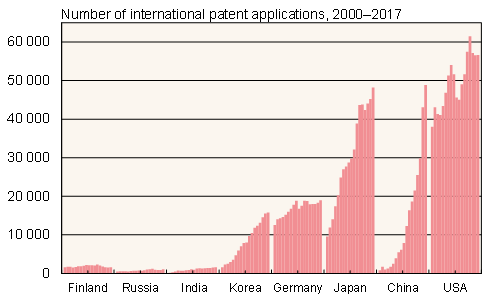