Rosstat reports that the net profits of large and medium-sized firms (excluding the financial sector) dropped last year in both nominal terms and relative to company turnover. The net profits, nevertheless, were still quite good, equal to over 8 % of turnover and 11 % of GDP.

Profits over the past couple of years have allowed firms to increase their out-of-pocket investments. As total fixed investments contracted until last year, the share of fixed investments financed from other sources has shrunk, including domestic bank loans that already earlier had a small share.

Net flow of funds from firms to banks and abroad 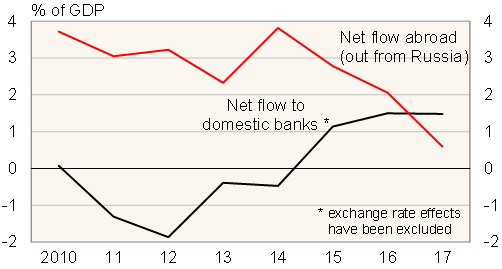