Despite the upswing in the business cycle, our latest BOFIT Forecast for China is darker than the previous forecast six months ago. Expected market reforms in our previous forecasts have yet to be implemented and the government has failed to bring debt under control. As China's economic policy continues to rely on high numeric growth targets, we have slightly boosted our 2018 growth projection, putting it on par with the government's official target of 6.5 %.

However, sustained high growth is becoming ever harder to achieve. The government has to deal with financial market risks and the country's massive pollution problems in the years ahead, not to mention the impact of the ageing population and shift to a services-based economy on growth. We thus expect growth to slow to a more sustainable level of about 5.5 % in 2019 and around 5 % in 2020, which means the government will slightly undershoot its target of doubling real 2010 GDP by 2020. In any case, China's growth figures should be taken with a grain of salt; growth targets incentivise officials to manipulate the numbers, so official GDP figures are not trustworthy.

During the forecast period, China's monetary policy officials face the unenviable task of reconciling the goals of maintaining an accommodative stance to support economic growth while reining in debt and stemming the increase in financial market risk. The situation is further complicated by the general rise in interest rates globally. The PBoC responded to the US Federal Reserve's latest rate hike last week by raising its 7-day repo (open market operations) rate by 5 basis points. The hike was largely symbolic.

Rising debt levels have increased the risk of a serious disruption in financial markets that could lead to a rapid slowdown in economic growth. The risks of trade disputes have materialised with the US now threatening China with new import tariffs. The party's role in the economy has also increased worryingly. The concentration of power in fewer hands increases the likelihood of errors in policy planning. 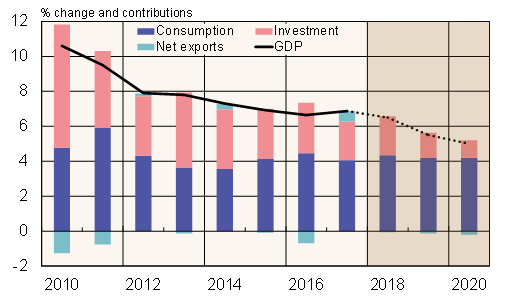