Housing market tracker SouFun reports that apartment prices generally rose in 2017, but with considerably slower pace than a year ago. SouFun's 99-city sample showed that the average price of a square metre of living space in December reached 14,000 yuan ($2,400), rising 7 % y-o-y. The price of a square metre of apartment varied from 4,500 yuan ($770) in Yingkou to 54,000 yuan ($9,300) in Shenzhen. The rise in prices was more broad-based than earlier. In January 2017 prices were still falling in 27 cities, but in December 2017 only five cities experienced price drops. In Beijing, prices continued to fell slightly in December and price increases also in other large cities were generally modest.

Growth in apartment sales slowed towards the end of last year. The volume of apartment sales, measured in square metres, was up about 5 % y-o-y, down from over 20 % the previous year. The volume of completed housing last year, measured in liveable floorspace, was down 15 % y-o-y and the aggregate floorspace of unsold apartments was down 25 % y-o-y. On the other hand, purchases of land rights for construction in the first eleven months of the year were up by over 40 % y-o-y, while new construction starts were up by 8 %.

The central government has sought to rein in soaring prices, tightening conditions for housing loans and making apartment rental more appealing. Officials also want to boost production of rental housing in big cities and rural villages by e.g. allocating a portion of lots with building rights to rental housing and granting cheap credit to builders and renters. 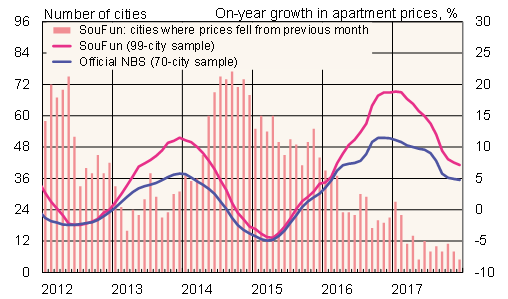