Preliminary demand-side GDP figures show that private consumption accounted for 39 % of total demand last year, slightly less than in 2016. The share of public consumption, still low by international standards, rose slightly to almost 15 % of GDP. The share of investment remained at 43 % of GDP, so at least by official figures there was no progress in restructuring the economy last year. However, statistical deficiencies make it difficult to evaluate true trends.

The National Bureau of Statistics reports that over half of China's 6.9 % growth last year came from consumption growth. Investment demand growth slowed to account for less than a third of GDP growth. Net exports accounted for a small part of China's GDP (2 %), and its contribution to growth was 0.6 percentage points.

The service sector's share of GDP last year remained at the previous year's level (52 %), while industrial production accounted for a 40 % share. As recently as 2012, the sectors were equal in size but the subsequent rapid structural evolution slowed down last year. Service sector output (up 8 %) grew faster than industrial output (up 6 %). From the supply-side perspective, the service sector accounted for well over half of last year's economic growth. The contribution of industrial production to GDP growth was just over a third, a low level for China. Agricultural production generated 8 % of GDP last year but employed over a quarter of the Chinese workforce. The sector's impact on economic growth was marginal. 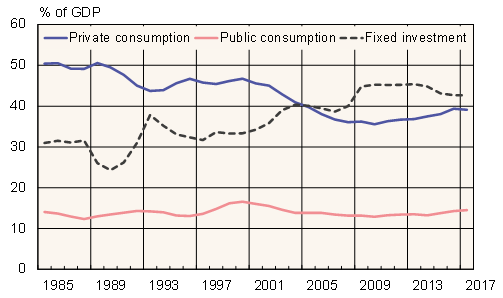