To deal with outflows of foreign currencies, declining forex reserves and depreciation pressure on the yuan, China over the past year has significantly tightened its rules on limiting and monitoring capital exports. The stricter rules also affect foreign direct investment (FDI) of Chinese firms.

Difficulties in keeping track of outward Chinese FDI mean that estimates vary widely. For instance, China Global Investment Tracker (CGIT), which is run by the American Enterprise Institute, tries to monitor all investments of Chinese firms that exceed 100 million dollars. CGIT indicates the outward FDI of Chinese firms last year amounted to 171 billion dollars. China's commerce ministry reports that FDI outflows from China in 2016 amounted to around 196 billion dollars. The State Administration of Foreign Exchange (SAFE), which compiles the data for China's balance-of-payments reporting, claims 217 billion dollars in outward FDI last year. Although estimates on FDI volumes rarely agree due to differences in methodologies and intended uses of the figures, the statistics of all the above organisations suggest that investment growth rose rapidly up until last year.

This year's trend has been substantially weaker. The commerce ministry and SAFE report that the outward FDI of Chinese firms contracted by 40–60 % y-o-y in the first nine months of 2017. CGIT notes, however, that FDI in the first half remained at about the same level as in 1H16, largely due to the June booking of the acquisition of Swiss Syngenta by ChemChina for 41 billion dollars. When the Syngenta deal is excluded, Chinese outward FDI as measured by CGIT declined by over 40 %.

Chinese FDI abroad last year exceeded China's FDI inflows for the first time. The trend has now reversed. The commerce ministry valued Chinese outward FDI (excluding financial sector) in the first ten months of this year at 86 billion dollars (-40 % y-o-y), while inward FDI to China was valued at 101 billion dollars (-3 %). It is unclear whether China's own figures will include the Syngenta deal. 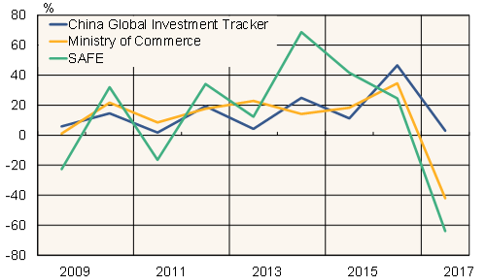