By the conclusion of the harvest season on November 1, over 135 million metric tons of grains and other grain staples had been harvested – an all-time record for Russia. The harvest was 13 % larger than last year's and 45 % larger than the annual average harvest over the previous decade. The record harvest was entirely due to a strong improvement in crop yields. This and previous years have no longer seen increases in the area of land under cultivation. Harvests of other important staples, i.e. potatoes, sunflowers, sugar beets and vegetables were lower than last year, but the brisk growth of previous years meant that the harvests were still fairly large.

While the share of farm cooperatives, farming corporations and similar organisations has gradually declined, they still produce over 70 % of grains and other grain staple crops. Private career farmers (Russian fermeri) have gradually increased their share towards 30 % of all those crops. Small home plots continuously account for nearly 80 % of potato production and about two-thirds of vegetable production. 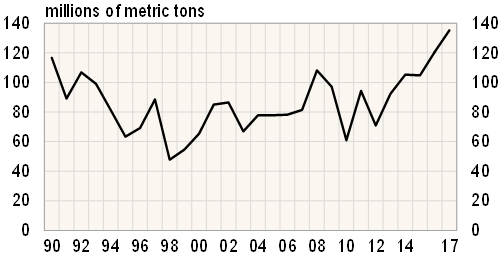