According to preliminary Rosstat estimates, Russian third-quarter GDP rose by 1.8 % y-o-y, down from 2.5 % in the second quarter. Growth appeared to slow on moderating export and investment demand, which was reflected on the production side e.g. in slowing growth in oil output. Sentiment surveys and other forward-looking indicators also offered little promise of higher growth in the last months of this year.

Russian GDP grew by 1.6 % y-o-y in the first nine months of this year. The trend relatively closely matches BOFIT's 1.5 % GDP growth forecast for 2017. 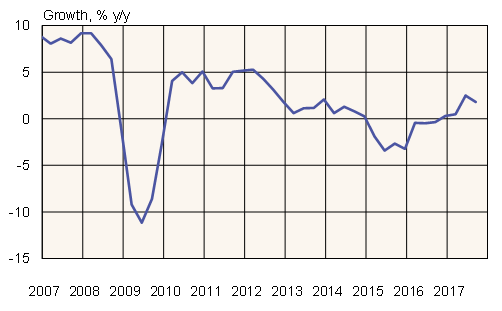