The first official visit of United States president Donald Trump to China on Wednesday and Thursday (Nov. 8–9) was a part of his 10-day Asia tour. Going into the China visit, the two countries faced next to impossible challenges to resolving tensions with North Korea and reducing the large imbalances in US-China trade.

Based on released comments on Thursday, progress in resolving these issues was indeed modest. Even though it was claimed that US firms had signed deals with Chinese counterparts worth a total of 250 billion dollars, most of them were just letters of intent or deals that had been agreed earlier. Trump blamed the current trade deficit problems on policies of previous US administrations. American firms said they would like to see more concrete measures to open Chinese markets and assurances of fair treatment. North Korea figured heavily in the headline addresses, but no new initiatives to resolve tensions were announced.

Trade between China and the United States has grown in recent years. According to Chinese figures, China's goods exports to the US rose 11 % in dollar terms in the first ten months of this year, while imports were up 17 % y-o-y. Even if import growth has been faster than export growth, China's trade surplus with the US in the January-October period increased to 225 billion dollars from 209 billion dollars in the same period last year. Trump's has repeatedly talked about the trade imbalance, even if bilateral imbalance is hard to address from a policy standpoint in the current global economy. According to US figures, the trade deficit with China in the first nine months of this year exceeded 274 billion dollars, or nearly half of the entire US trade deficit.

China and the US are important trading partners for each other. The US accounts for about 20 % of Chinese exports and it is China's largest single export market. Although the EU is China's biggest import market, the US accounts for 7 % of Chinese imports and is about as large a trading partner with China as Japan, South Korea or Taiwan. China purchases 8 % of US exports and provides 21 % of all imports to the US. In terms of imports, China is by far America's largest trading partner. In exports, only exports to Canada and Mexico are greater.

Both countries invest heavily in each other. According to foreign direct investment figures compiled by the Rhodium Group, the cumulative FDI of American firms in China at the end of 2016 exceeded 240 billion dollars, while the stock of Chinese FDI in the US amounted to roughly 110 billion dollars. Chinese investment in the US soared in recent years, but this year investment has slowed due to the clamp-down on capital exports from China. In any case, the US accounts for a significant share of outward Chinese FDI, which has even raised a discussion in the US over the wisdom of restricting Chinese investment.

China's trade with the US 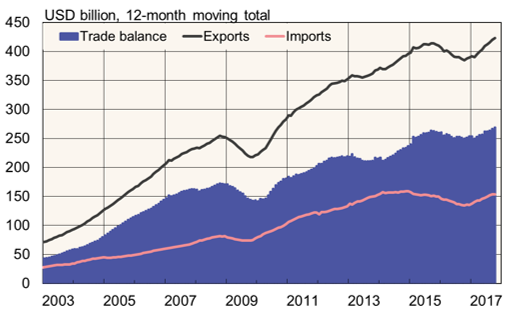