At its regular meeting last week, the Central Bank of Russia's board again lowered the key rate. The 25-basis-point cut to 8.25 % took effect on October 30. The central bank board noted that, while the slowdown in 12-month inflation continued in October with inflation dropping below 3 %, it was due mainly to transient factors. In addition, the CBR said that the fall in inflation expectations is not yet sufficiently large, sustainable and broad-based to justify more robust rate cuts.

The rate cut was in line with market expectations. The latest cut included a slight change in the CBR's forward guidance. Earlier cuts were accompanied with messaging about the need to maintain a moderately tight monetary stance, but now the CBR referred to a gradual shift from the moderately tight stance to neutral monetary policy. In addition, the CBR noted further rate cuts are possible in the next meetings instead of the earlier six-month horizon. Many market analysts viewed the guidance as an indicationg of a faster relaxation in the policy stance, even if specific interpretations vary somewhat.

At the September rate meeting, governor Elvira Nabiullina emphasised that making the current 4 % inflation target sustainable would require a further reduction in inflation expectations and an anchoring of those expectations at a lower level. She noted that the level of key rate in the range of 6.5 -7 % that is compatible with the inflation target might be achieved in 2019.

The pace of Russian inflation has slowed in recent months to record lows – so low in fact that some Russian government officials have called for even more accommodative monetary policy. President Vladimir Putin, however, recently expressed strong support to the CBR's cautious policy approach. 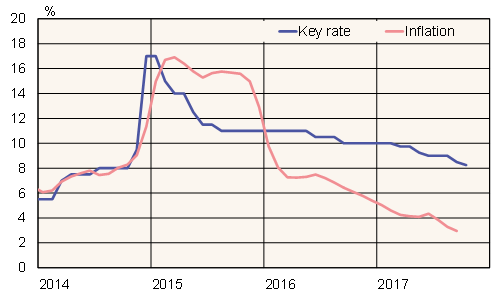