Prices of industrialproducts delivered domestically were up by nearly 8 % y-o-y this year so far. The rise matched last year's pace, even if it has moderated in recent months. The brisk pace was basically due to an acceleration of increases in extractive industry prices to 15 % y-o-y. The rise in manufacturing producer prices slowed slightly from last year's pace and in recent months has been running at around 6 % y-o-y.

Changes in world market prices of oil, oil products and metals feed more broadly into inflation in Russia via their domestic producer prices that track the export prices. Higher producer prices in these three basic commodity groups affect costs in other manufacturing branches and generate price pressures that roll further on into consumer prices. The impact on Russian prices via this channel is tangible. The three commodity branches account for nearly 15 % of the total domestic delivery volume of goods and services. True, consumer prices are also affected by imports, particularly when ruble exchange rate fluctuations are large. However, in periods when the ruble's exchange rate is fairly stable the role of imports is limited as import prices change only modestly, even if imports of goods and services equal over a fifth of Russia's domestic demand. 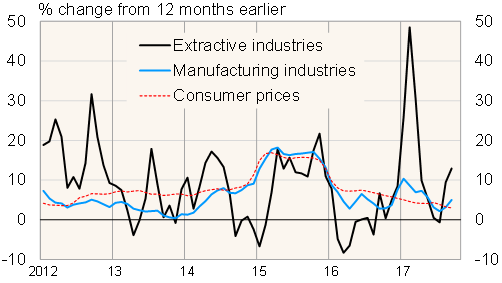