China's official figures show that the deficit of the public sector (central and local governments combined) has been running at 2–3 % of GDP in recent years. These official public sector figures, however, are not comparable with countries using accepted international standards and Chinese numbers, for example, omit the extensive off-budget activities of local governments. As in earlier years, the IMF has evaluated in its latest Article IV consultation the condition of China's public sector under internationally comparable standards taking off-budget financing into consideration. The IMF notes that China's augmented public sector deficit last year likely exceeded 10 % of GDP and is unlikely to shrink this year.

Local governments were granted the right to issue bonds in 2015. Previously, all local governments were required to have balanced budgets, making debt acquisition out of the question. This rule was widely circumvented through the creation of off-budget "local government financing vehicles" (LGFVs). Under a programme launched in 2015, local governments and provinces were encouraged to issue their own bonds and use the money raised to pay down off-budget debt. In reality, LGFVs have continued to pile up debt. At the start of 2016, local administrations were granted the possibility to implement investment projects by including private financiers – the so-called Public Private Partnership (PPP) model. In practice, a "private partner" in China is typically a firm owned by either the state or a local government. The model has gained increasing popularity, especially this year. The IMF noted that the distinction between the LGFV and PPP models seems to be minor. China's finance ministry recently conceded that local governments use PPP financing models to disguise their borrowing. Observers note that risks in PPP projects are usually borne by the government, while private partners are guaranteed fixed returns on their investment. 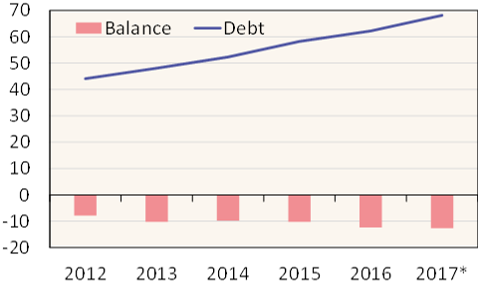