Rosstat reports that seasonally and workday-adjusted industrial output, which posted robust increases throughout the spring, declined on-month in both June and July. The on-month contraction in July was as large as about 1 %. Compared to July 2016, July industrial output was up by 1 %.

The slide in industrial output in June and July was driven by declines in manufacturing, which in July made output nearly 1 % lower than even in July 2016. Notably, however, the entire manufacturing output drop in July and part of the good performance in spring were due to transport vehicle production (excluding automobiles). In mineral extraction industries, the long stretch of seasonally-adjusted growth in output plateaued in July.

The recovery in construction activity that began last spring, continued in July. Construction was up by a whopping 7 % y-o-y.

As in previous months, seasonally-adjusted volume of retail sales rose slightly in July, but growth was still very slow. The volume of retail sales in June and July exceeded the level of a year earlier by about 1 %. Real disposable household incomes in July performed slightly more weakly than in previous months, however. The small recovery in consumption has still been largely dependent on a decline in the household savings rate and a gradual recovery of borrowing. 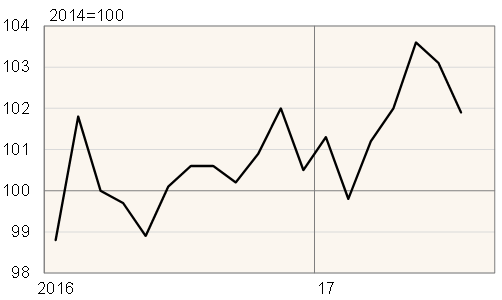