Rebound of revenues on the consolidated budget (federal, regional and municipal budgets plus state social funds) continued in the second quarter of this year. For the first half of 2017, revenues were up 16 % y-o-y in nominal rubles. Revenues from oil & gas taxes rose by 37 % from the lows of 1H16, while other budget revenues increased by nearly 12 % (well above Russia's 4.4 % inflation rate). Even if growth in revenues from excise taxes and corporate profit taxes slowed in the spring, both revenue items in the first half of the year were nearly 20 % higher than in 1H16. Revenue streams from social taxes and value-added taxes, which form the consolidated budget's two largest revenue streams, as well as revenues from property taxes, continued to experience strong growth, rising by 11–12 % in the first half of the year. Labour income taxes also generated clearly higher revenues than a year ago.

Thanks to higher revenue flows, the first-half consolidated budget showed a slight surplus. Budget spending increased by over 6 % y-o-y, which meant real growth was rather moderate. Social spending, however, increased by about 10 %, even when omitting the one-time pay-out to pensioners at the start of the year. Budget spending in the housing sector as well as in different sectors of the economy turned to notable growth after some years of decline. Even with a slightly less severe restraint, the spending track on education remained weak, while spending on healthcare declined. The zero-growth line on administration spending seen last year remained in place. After a string of boom years, defence spending declined by 8 %. Spending on domestic security continued to decline as it has for about three preceding years. 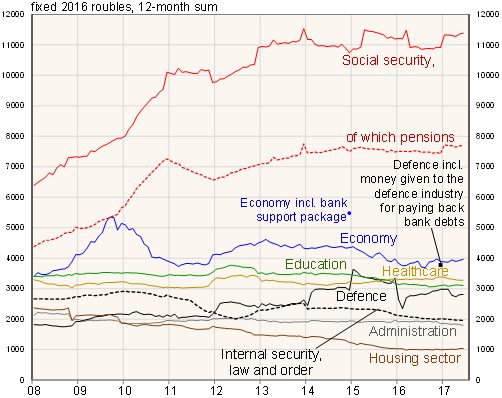