The National Bureau of Statistics (NBS) reports that the Chinese economy maintained its first-quarter GDP growth pace of 6.9 % p.a. in the second quarter. Quarterly growth picked up in April-June to 1.7 % q-o-q. This year's growth target of "about 6.5 %" appears quite achievable, even if the officially reported growth slows slightly in 2H17.

Higher domestic and foreign demand lifted industrial output, resulting in higher GDP growth. National accounts data show industrial growth accelerated in the first half to 6.5 % y-o-y (6 % in 2016), while growth of the service sector remained at about 8 %. Monthly indicators support this view. Growth in industrial output accelerated in June to nearly 8 % y-o-y and retail sales grew by 10 %. After falling in 2016, China Customs figures show export freight volumes recovered this year.

With growth in fixed investment slowing, economic growth has become increasingly reliant on consumption demand. Second-quarter real growth in fixed asset investment (FAI) slowed to 4 % y-o-y, while private investment growth was 2 %. Public investments are supported by infrastructure investments, which increased in real terms by 17 % y-o-y in the first half. They now account for a fifth of all FAI. Domestic consumption was supported by relatively good growth in incomes. The NBS notes that real income growth exceeded 7 % y-o-y in the first half, one percentage point higher than in 2016. 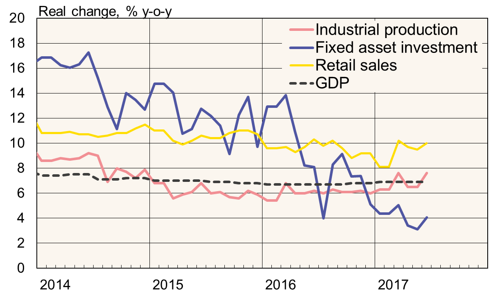