PBoC figures show that the stock of domestic bank lending in China was up 13 % y-o-y at the end of June, with stock of bank loans exceeding 150 % of GDP. Similar to last year, about half of new bank loans in January-June went to households (mostly housing loans). While households in China carry relatively little debt, they are currently taking on debt much faster than the corporate sector. The stock of bank loans granted to households in June increased by 31 % y-o-y to 24 % of the total credit stock.

Under China's broader debt concept of Total Social Financing (TSF), the credit stock (financing to households and non-financial businesses) in June was up 13 % y-o-y. Lending by the shadow banking sector (bank's acceptances, trust and entrusted loans) has continued to increase again this year. In June, the shadow lending stock was up 16 % y-o-y. In contrast, corporations have cooled from last year on new financing with stock and bond issues. Growth in the debt-to-GDP ratio has slowed this year, as nominal on-year GDP growth in the first half was over 11 %, compared to 7 % in 1H16. 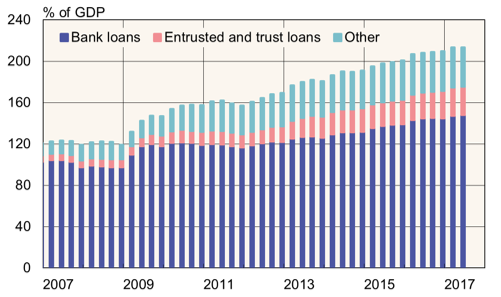