After rising throughout the spring, seasonally and workday-adjusted industrial output contracted slightly in June. In on-year terms, industrial output was up in June by 3.5 % and by 2 % in the entire first half of the year. Mineral extraction industries (includes oil & gas) have grown through the past one-year period, and were up over 3 % y-o-y in the first half of this year. Natural gas production has climbed 13 %, while crude oil production was up by nearly 2 %. Manufacturing growth turned down in June, and first-half growth was less than 1 % y-o-y.

The volume of seasonally adjusted retail sales increased slightly further in June, with retail sales up in the May-June period by about 1 % y-o-y. Household consumption this year has recovered slightly faster than the retail sales figures indicate, because Russian shopping abroad has recovered quite sharply. Real household disposable incomes have risen in recent months, recovering to the same level as in May-June 2016. The revival in private consumption has been stronger than income growth, reflecting the fact that households have been saving less and borrowing more than last year.

Growth in agricultural output has remained slack all this year, up just 0.2 % y-o-y in the first half. Construction, in contrast, picked up in May-June after a lengthy period of decline. Construction activity was up 4–5 % y-o-y. Goods transports have been a boom sector of the economy showing robust growth due to increased rail transport and pipeline transmission of oil & gas. The volume of goods transportation was up by over 7 % y-o-y in the 1H17. 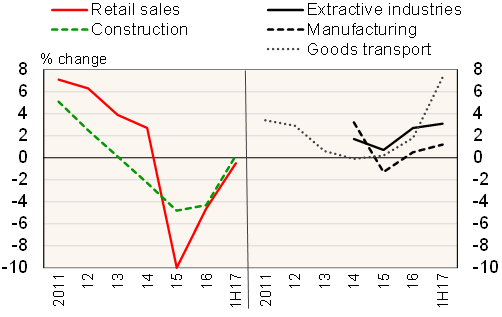