Second-quarter revenues were up substantially from a year earlier, like in 1Q. First-half revenues were up by over 20 %, well outpacing inflation (consumer prices were up 4.4 %). Revenues from oil and gas taxes rose by over a third. Other budget revenue streams overall grew nearly 13 %, including a rapid rise in VAT revenues.

Budget spending under tighter budget policies increased by just over 4 % y-o-y in the first half. Defence spending fell by 5 %. The budget deficit contracted to 1.2 % of GDP, leading towards this year's deficit target of 2.1 % of GDP, even if the deficit is typically larger in the second half.

In real terms, the revenues and spending in the federal budget are still low due to high inflation in recent years. Largely due to lower oil & gas tax revenues, real first-half revenues were notably lower than in 2011. First-half spending in real terms exceeded the level of 1H11. 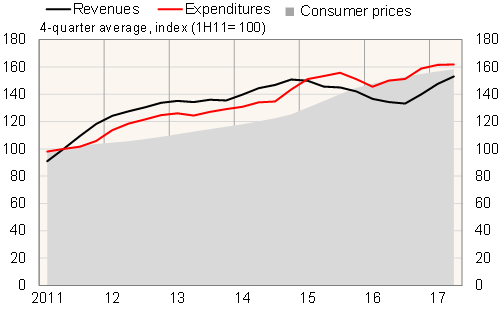 Sources: Ministry of Finance and Rosstat.