The life expectancies especially for men in Russia are expected to rise further in coming years, tracking trends in most developed countries. Therefore, Rosstat's latest demographic forecast expects the number of pensioners to increase significantly. The middle variant of Rosstat's three forecast scenarios sees the number of working age people falling by the end of 2035 by slightly over 4 % to 78.7 million people. In the UN's latest demographic forecast, the number of Russians between the ages of 15 and 60 will decline slightly more between 2020 and 2035 (about 5 %). In Rosstat's forecast the labour force will be bolstered by net immigration adding 300,000 people a year to the workforce through 2035.

Life expectancies in selected countries in 2015 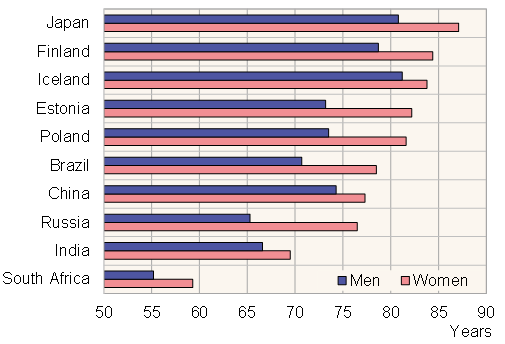